We would like to take a moment to offer our most sincere condolences to the friends and family of those who were lost in the tragic grounding of the Costa Concordia on Friday, January 13. Our hearts go out to those who are grieving, as we cannot begin to comprehend their loss.

The tragedy that Friday, however, was twofold. Thus far, the media has thus far focused primarily on the human element of this tragedy. We here at the Marine Conservation Institute would like to offer a sobering reminder that the second act of this tragedy has yet to unfold.

When the Costa Concordia ran aground off the Tuscan Coast, it capsized dangerously close to the largest marine sanctuary in the Mediterranean—the Tuscan Archipelago National Park. The sanctuary is home to a variety of dolphins and whales, along with other marine creatures. A fuel leak from the capsized ship could be especially devastating. Likewise, debris from the wreck poses a great danger to these animals as objects—including large items, such as tables and chairs—being to float away from the ship and disperse in the sanctuary.

Officials now must work towards the safe, yet swift, removal of the ship’s fuel–as well as the development of a plan to remove the hazardous debris from the area.

A barge carrying a crane and other equipment hitched itself to the toppled Costa Concordia on Tuesday, signalling the start of preliminary operations to remove almost 1.9 million litres of fuel from the grounded cruise ship before it leaks into the pristine Tuscan sea.

Actual pumping of the oil isn’t expected to begin until Saturday, but teams from the Dutch shipwreck salvage firm Smit were working on the bow of the Concordia on Tuesday and divers were to make underwater inspections to identify the precise locations of the fuel tanks.

They were at work on the now-hitched Meloria barge as divers who blasted through a submerged section of the third-floor deck located another body from the wreckage, bringing the death toll to 16. 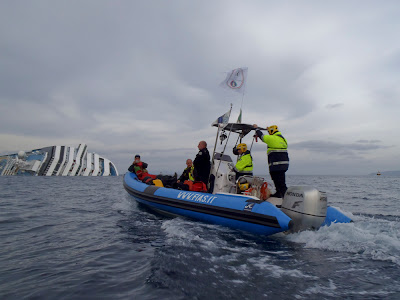 The Concordia ran aground and capsized off the Tuscan island of Giglio on Jan. 13 after the captain veered from his approved course and gashed the ship’s hull on a reef, forcing the panicked evacuation of 4,200 passengers and crew.

The 16 bodies found so far include the one located on the third-floor deck Tuesday. Seven of the badly decomposed bodies remain unidentified and are presumed to be among some of the 17 passengers and crew still unaccounted for. On Tuesday, the U.S. ambassador to Italy David Thorne was at Giglio’s port where he had lunch with relatives of two missing Americans, Gerald and Barbara Heil of Minnesota.

“I think it’s a tragedy, we feel very badly for all the families,” Thorne told journalists after the meeting.

Giglio and its waters are part of a protected seven-island marine park, favoured by VIPs and known for its clear waters and porpoises, dolphins and whales.

Officials have identified an initial six fuel tanks that will be drilled into, tapped and outfitted with hoses to vacuum out the oil from the Costa Concordia. Franco Gabrielli, head of the national civil protection agency, told reporters Tuesday that once those initial six tanks are emptied, 50 per cent of the fuel aboard the ship will have been extracted.

The pumping will continue 24 hours a day barring rough seas or technical glitches, he said, noting that these six tanks are relatively easy to access.

“At this stage we don’t see a big risk in an oil spill, but if weather deteriorates nobody can tell what the vessel will do,” Bart Huizing, head of operations at Smit, told The Associated Press.

The disaster prompted the UN cultural organization to ask the Italian government to restrict access of large cruise ships to Venice, which is a UNESCO World Heritage Site. UNESCO charged that the liners cause water tides that erode building foundations, pollute the waterways and are an eyesore.

Italy’s environment minister, Corrado Clini, appeared to take up the cause Tuesday. “The aim is to free St. Mark’s basin from the big ships once new canals have been dug,” Clini was quoted by the Italian news agency ANSA as saying during a public appearance in northern Italy. He did not elaborate.

But Clini added that “in the meantime, it will be up to the port authority and to the city to decide which (sea) traffic is sustainable and compatible” with Venice’s particular situation.”

Venice officials have said that since tug boats guide the big cruise ships through the part of the lagoon weaving through the city, the risk of accidents is virtually eliminated.

Divers, meanwhile, continued blasting holes inside the steel-hulled ship to ease access for crews searching for the missing. The search and rescue operation will continue in tandem with the fuel removal operation.

Smit officials say the first thing divers will do is drill holes into the tanks and attach valves onto them. The sludge-like oil will then be heated and hoses attached to the valves to suck out the oil as seawater is pumped into displace it.

“It’s never a routine, there is always a risk, but we’ve done this before, so at this moment we don’t see any problems,” Huizing told AP. “But still it is difficult because it’s really heavy fuel oil which we most probably need to heat before we can pump.”

On Monday, islanders and officials spotted an oil film on the water about 300 metres from the wreck. Absorbent panels were put around the oil to soak up the substance and officials said Tuesday it was a very thin film that didn’t present any significant levels of toxicity.

Gabrielli said he had formally asked Costa Crociere SpA, the owner of the Concordia, to come up with a plan for what to do with the innards of the ship that are floating away — the tables and chairs and other furniture that are knocking into divers and being hauled away by barge on a daily basis. And he said he had asked provincial authorities to designate a site on the mainland where the material can be dumped.

Costa is a unit of Miami-based Carnival Corp., the world’s biggest cruise operator.

It has blamed the captain, Francesco Schettino, for the disaster, saying he made an unauthorized and unapproved deviation from the route. Schettino remains under house arrest facing accusations of manslaughter, causing a shipwreck and abandoning the ship before all passengers were off.

Early Tuesday, amid continued outrage by passengers of the chaotic evacuation, Costa promised to refund the full cost of the cruise, reimburse all travel expenses to and from the ship, all on-board expenses and any medical expenses incurred as a result of the grounding.

“Every effort will be made to return the valuables left in the cabin safe,” Costa said in a statement.