For most of us, guiding the pilots of submersibles or underwater robots to explore the deep sea is something we only hope to have the chance to experience in our lifetime.

For Sandra Brooke, Marine Conservation Institute’s Director of Coral Conservation, it’s a core part of her work. On August 15, Sandra set sail on the NOAA research vessel Nancy Foster as part of the continuing Atlantic Canyons Undersea Mapping Expeditions project. The 2012 research cruises from August 15th to September 30th will be divided into three separate legs; the first two legs will explore natural ecosystems and habitats found within the canyons, and the third leg will examine historical shipwrecks and their biological communities.

Sandra in a submersible preparing to survey deep sea coral ecosystems for damage after the
Deepwater Horizon oil spil in the Gulf of Mexico
As co-Principal Investigator on the first two legs of this summer’s research cruise to the Baltimore and Norfolk Canyons, Sandra and her science colleagues – representing three government agencies, numerous academic institutions, and private sector partners – will conduct video and photo transects, collect samples of invertebrates and fishes, and deploy instruments to collect long-term environmental data.
So, why these canyons?  The Baltimore and Norfolk canyons are two of America’s unknown Grand Canyons – far less explored than the Grand Canyon of Arizona and Colorado, but vitally important in their own ways. There are 13 major canyons off the American mid-Atlantic, from The Point off North Carolina to Cape Cod. Some were scoured by rivers during past low sea level periods, but most formed due to other geological processes. These deep canyon ecosystems merit continued scientific study because of their ecological importance: notably, they seem to support far greater abundance and diversity of invertebrates and fishes than other deep sea habitats, but biological studies are sorely lacking. They are also sites of intense recreational and commercial fishing interest. 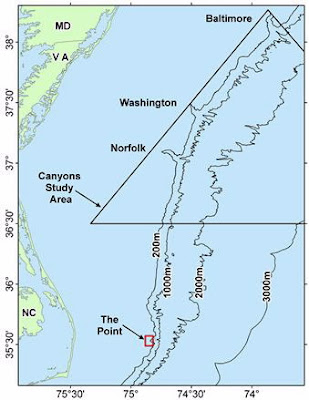 Sandra and her colleagues will be busy throughout the tour. They will conduct 24-hour operations to maximize the ship’s research tools. During the daytime, she and other scientists will pilot the ROV Kraken II to survey biological communities associated with different canyon habitats and they will monitor video footage and digital images to better understand different habitats and the biodiversity of canyon communities. They will also use the ROV’s robotic arms to collect samples of deep-water corals, other canyon fauna, and sediment cores. Overnight, researchers will supplement the ROV samples by using boxcores and small trawls to collect additional deep sea life and sediment samples.
Deep-sea studies are limited by the short duration of their field work; research cruises are expensive and are usually 2-4 weeks long. Since this is just a ‘snapshot’ of real-time information, one of the most exciting parts of this project is the application of sophisticated technology, deployed on platforms called Benthic Landers. These devices will be placed at the head, middle, and the base of Norfolk and Baltimore canyons, and will remain there for a year, collecting data on temperature, salinity, oxygen, chlorophyll, currents and monthly sediment deposition. The Landers will also be equipped with a series of settlement plates to assess recruitment and colonization rates of benthic fauna, and experiments to measure growth and survival of deep-water corals. Data collected by these instruments and experiments will advance our understanding of the biology, ecology, and oceanography of canyons by bridging the gap between sampling cruises.
Marine Conservation Institute is honored to be a continued part of the Mid-Atlantic Deepwater Canyons project. The project is co-funded by the Bureau of Ocean Energy Management (BOEM), NOAA’s Office of Ocean Exploration and Research, and the U.S. Geological Survey, through the National Oceanographic Partnership Program. The project is managed by Continental Shelf Associates, and includes scientific partners from numerous academic institutions and other partners.
So stay tuned to hear from Sandra as she reports back on her findings and gives us a chance to experience a life some of us dream to be a part of someday.