In an earlier blog, I started (threatened?) to dialogue with you about the principles necessary to save the Earth.  I haven’t expanded on them because I’ve been almost totally consumed by something we and our allies at Sylvia Earle’s Mission Blue released on May 29 called SeaStates 2013 (http://seastates.us/).  Happily, this blog is an opportunity for us to discuss both SeaStates 2013 and the first of the principles.

The cover of SeaStates 2013 says what we really care about: Our families and our oceans. 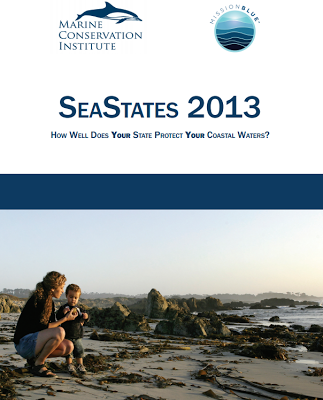 SeaStates 2013 is our way of announcing that we’re watching the state governments we pay for, specifically, watching their performance in protecting our oceans.  Without carrying a placard, throwing an insult, filing a lawsuit or firing a shot, motivated by self-interest in having a healthy planet, by community spirit and by love for the Earth, we and Mission Blue decided to step up by shining a light on how well governments are protecting our stake in healthy oceans.  With deep commitment to the oceans, to scientific integrity and to our fellow citizens, we are holding our governments publicly accountable.  Not everyone would agree, but that seems pretty revolutionary to me.

Why, you might ask?  A very wise person once said:

“Publicity is justly commended as a remedy for social and industrial diseases.  Sunlight is said to be the best of disinfectants; electric light the most efficient policeman.”

They were the words of Louis D. Brandeis (1856–1941) when he was a United States Supreme Court Justice.  We and Mission blue take Justice Brandeis’ advice.  SeaStates 2013 shines a light on the people who govern us.

We want people to read SeaStates 2013, so it’s no dull tome fated to collect dust on some little-used bookshelf.  Rather, it’s our way of using our expertise to hold our elected, appointed and career government officials accountable for their performance on oceans.

When Marine Conservation Institute President Lance Morgan first charged me with realizing his vision for SeaStates 2013, he forced me to contemplate why government effectiveness is so important us if we’re going to save the Earth.

Here it is:  For better and worse, people treat the land and sea differently. 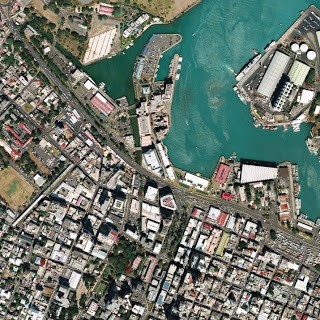 We can all see that the land is a mosaic of places (this one is on the island of Mauritius), but yet we treat the sea as if it’s all the same, as if it doesn’t have places.  As marine ecologists, Lance and I know this is a big mistake.

Even more important, laws in most countries allow people to own land, but the sea is essentially all managed by local, state and national government agencies.  So if you want to save the sea, you have to deal with government.  There’s no getting around that.

And when it comes to protecting the ecosystem mosaic in coastal and offshore waters, governments have traditionally operated in the darkness, free from public scrutiny.  Their unilluminated labors haven’t always been good for the oceans.  A number of US government programs celebrate our oceans, even as they watch the oceans continue to decline.  We at the Marine Conservation Institute certainly like seeing our governments celebrating seas, of course, but we want them to focus more on actually conserving them.

I don’t want to tell my grandchildren what elkhorn corals, Nassau groupers or blue whales were like.  I want my grandkids, your grandkids, our grandkids, to see them for themselves.  In that sense, I’m a selfish guy.

In 2013, a lot of people (not only ones on the Far Right) seem to be hating government.  But as my mother used to teach, “Hatred is a sickness.”

What I think she meant is that it’s symptomatic of a person who has given up on using politics (interpersonal interactions) to get what he or she wants.  Hating means deciding not to cooperate no matter how much not cooperating hurts the hater.  Hating is emotion that defines the philosophy of the suicide bomber.

Suicide bombers are human failures who, unlike most people, can’t get their way through politics (again, this means interpersonal interactions, from those in in a marriage or grocery checkout line to those in Congress or the UN General Assembly).  After all, we humans are political animals.  Those who aren’t hermits or insane must constantly navigate the maze of human relationships, sometimes skillfully, sometimes not.  Suicide bombers are people who fail at human relationships, vent their frustration on their victims (usually finding reasons to blame harmless ones), and endeavor to get noticed to make their point (effective suicide bombers must be good at PR!).

But suicide bombing is the clearest indicator of a losing or lost cause.  It’s so corrosive because it nihilistically ignores its more difficult but much more human alternative, namely succeeding through politics.  Getting people to do what you want.

Humans like getting our way, and I’m human.  Quite specifically, I want to save our oceans, and—as embarrassing it to say this—it would be really good for everybody if I actually get my way on this.  We really do need living oceans.  And we don’t have much time to dither.

Moreover, being a human, I get that hating is sometimes an understandable mindstate to be in, and perhaps, sometimes, very occasionally, even usefulin the short-term.

But hating is always, always, always the wrong mindstate to have in the longer term.  Hating is the one feeling that—if not quickly abandoned—always kills both the hater and its victim.  Even faster than despondency.

And even when there is more than enough justification to hate (and, people being people, there will be always be lots of justification!), we shouldn’t succumb to hatred because it will kill us all.  As Jim Morrison said, “No one here gets out alive.”  Hating is a dead end.

There has to be a better way.

If we want to win—if we want to save the Earth and survive—we (part-time and fulltime, amateur and professional) EarthSavers have to understand why people behave as they do so we can reshape people’s unsustainable behaviors.

The Marine Conservation Institute’s work—saving the Earth—is about people even more than marine life.  If the right people don’t decide—and very quickly—to do the smart thing for them, us and the oceans, we humans are all on a rocking boat, standing the end of a plank that we didn’t have to make ourselves walk.  We won’t like how this story ends unless we change things.  Threatening the oceans threatens ourselves. Sylvia’s right on in calling the ocean “the blue heart of the planet.”  And only we—you, me, all of us who are cognitively and ethically alive right now—can save it.  It’s a choice.  It’s a choice we’d better make.

We can’t do it alone.  We need help from our friends.  But it’s not going to happen without us.

To Lance and team, deciding not to destroy our planet, maintaining a biologically diverse, productive, livable Earth is the ultimate act of patriotism. It is the willingness to sacrifice for our people in a cause far more important than we are. Our Red, White and Blue needs to add Green.  And the biggest green thing of all is actually blue.  The ocean.  Our playing field.  It’s much older and much bigger than us.  We had better not kill it.  We live on this Earth thanks to our ocean, which is a lot of why we are dedicated to safeguarding it.

Yes, all of us at the Marine Conservation Institute right now are Americans.  But our country’s boarders are no longer isolating us from weather patterns, ocean currents, microorganisms, and economic flows.  Whether we like it or not, we are now connected with the entire world. What we do affects them, what they do affects us. That’s why if we’re really patriotic, we need to understand that our country is the Earth.  Not just a piece that some particular government controls.  The whole Earth.  If you love your country, you’ve got to love the Earth.

It’s ours to ruin or save.  And just to remind us again, that means ruining or saving ourselves.

The Marine Conservation Institute is here to take in information, think intelligently about it, diagnose problems, propose solutions and then help people do what it takes to save life in the sea.  It is a special privilege to be doing this work.

This is by far my longest blog, and I beg your indulgence.  Because I wanted to bring SeaStates 2013 to your attention, I didn’t want to take all the time needed to say this all more succinctly.  I humbly apologize.

And since you’ve waited this long, you deserve some positive reinforcement, so here it is.  Here’s the first principle (drumroll, please!):

1)       There is still opportunity to save the sea (and us).  Ours is not yet a lost cause.  If the sea is important to us, our biggest problem is getting enough of the right people to accept that it’s in trouble andthat we can still succeed in saving it.  We have to get people from the ends of the continuum between “We’re aren’t causing problems!” to “The world is going to end no matter what we do!”  Lance and our team are somewhere in the middle and have to motivate the people in the middle.  Extremism isn’t going to save the sea.  We have to get humankind to think and feel the rightness of the idea that people need healthy oceans so they’ll do what it takes to save the sea.  To do that, somebody really needs to get people’s attention.  The biggest problem marine conservationists face is that we don’t have people’s attention yet.

The first principle I want to offer you: It’s not too late.  Time is short, very short, but there is still opportunity to save the sea.

I seek your reasoned comments on this principle; we do notneed a flame war here.  We need to find a solution that works.  Fast.  And we and our Mission Blue allies are starting by holding the people of our government accountable for protecting our oceans.