On December 10, it appeared that valiant efforts by ocean conservation groups came close to, but had fallen short of ending the environmentally destructive practice of bottom trawling in the deep-sea waters surrounding Europe. But, in the truly strange world of European Parliament rules and procedures, a revised count of their vote shows that a majority in the Parliament support ending destructive deep-sea bottom trawling. Corrections, which are allowed under Parliamentary procedure after a vote has occurred, enabled 20 MEPs to register a change to their vote.  As a result, the Fisheries Committee “compromise” – to eliminate the proposal to phase-out deep-sea bottom trawling – was rejected by the full Parliament.

This is indeed very welcome news for a coalition of marine conservation advocacy organizations and (in a profound way) for Marine Conservation Institute.  Europe looks poised to ban the world’s most-destructive fishing practice in its deep seas.
What is bottom trawling? Bottom trawling is the most destructive form of industrial fishing, where a large net with heavy weights is dragged along the seafloor, plowing down everything in its path.  Imagine if this occurred on land: Thousands of powerful vehicles (that can range in size, some as large as 18-wheelers, others as big as a 40-story building) dragging heavily weighted nets across the landscape, catching all kinds of wildlife while uprooting, crushing and burying trees and smaller plants. 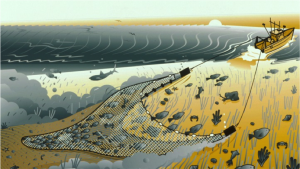 If this hellish image makes you say “No.  Enough!  I won’t let this happen!” you will understand why I am celebrating this vote, even as more work is needed.

The European Union will be formulating new regulations in the coming year and it will be important that fisheries ministers take into account the vote of the European Parliament. This is really critical significant because deep-sea industrial fishing is almost always extremely unsustainable.  Deep-sea trawlers and gillnetters are so appallingly wasteful of marine life that civilized nations need to end their operations immediately and permanently.

As it turns out, I have some authority on this issue.  In 1995 or ’96, I had sought to meet with an eminent marine biologist and oceanographer named Les Watling, then at the University of Maine’s Darling Marine Center.  I had spent enough nights on bottom trawlers in 1971 and ‘72 to know that this was a horrible process (see the photo below that I took my first time on a shrimp trawler).  Having previously published two books on forest conservation (Norse et al 1986 and Norse 1990) I had a pretty good idea about the impacts of forest clear-cutting and associated practices.  Seeing how people manage forests opened this marine biologist’s mind about bottom trawling.

Les and I decided to hold a scientific workshop where we’d invite scientists and key people from the media to discuss what they know about impacts of bottom trawling and causes of natural disturbance.  The scientists came from Australia, New Zealand, Canada, the United States and the United Kingdom, from governments, universities, marine laboratories and advocacy organizations.  The journalists, lobstermen and others who participated seemed to understand how important this issue was.

An outstanding group of marine scientists participated.  And very quickly the scientists realized that bottom trawling is an enormous disturbance to the seafloor in many areas around the world.  Les and I then did some pretty basic calculations about the extent of bottom trawling and found—to our amazement—that bottom trawls annually swept an area twice the size of the lower 48 states.  That’s a pretty big environmental footprint.

Of course, this was only a first calculation.  There have been others since then, including the annual amount trawled in the NE Atlantic. They confirmed the scientists’ conclusion that bottom trawling is a huge (if largely unknown) disturbance of the Earth.

Les and I were the special editors of an issue of the journal Conservation Biology. The scientific papers in it examined the problem from several angles, in several places, all leading to the conclusion that bottom trawling is a major disturbance to the world’s ecosystems.  Les’ and my paper comparing bottom trawling to forest clear-cutting and quantifying the world’s bottom trawling footprint (Watling and Norse 1998), hit the media big-time in December 1998.  Fifteen years ago almost to the day, CNN and nearly 500 news outlets carried this story worldwide; it was the last big marine news hit of the International Year of the Ocean.  Google Scholar says it is still the world’s most-cited paper on mobile fishing impacts.  And, by arming people with scientifically robust information, it gave rise to a worldwide movement to reduce the harm from bottom trawling.  That, in itself, would feel good.  But wait….

In months to follow, we invited representatives from our fellow marine conservation organizations to a briefing about our results.  Only one of the organizations at our briefing then decided to take on the issue: American Oceans Campaign, which later became part of Oceana, bringing its interest in bottom trawling.  They, the Pew Environment group, Bloom Association, Seas At Risk and the Deep Sea Conservation Coalition deserve special appreciation for their ongoing efforts to achieve the progress in European Parliament.

Not only did we arm our fellow scientists with an important new research topic; we helped to inspire one of its key players.  At a Pew Fellows in Marine Conservation annual meeting some years after Les’ and my paper came out in Conservation Biology, I had the pleasure of meeting Matt Gianni, an amazingly smart, amazingly effective former commercial fisherman, now EU and high seas marine conservationist extraordinaire.  We talked about bottom trawling, especially in the deep sea.  Matt had important ideas about what we could do, and not long after, in New York City, a very visionary funder (the J.M. Kaplan Fund) and a group of marine experts from conservation organizations gathered.  All but one of the organizations that could do so decided to found and govern the Deep Sea Conservation Coalition (DSCC).  Marine Conservation Institute is still playing an active role with the DSCC.

Our organization continued to focus attention on destructive fishing and deep sea conservation.  In 2003, Marine Conservation Institute staff scientist, Dr. Lance Morgan (now our President) and his colleague Dr. Ratana Chuenpagdee of Memorial University published Shifting Gears, a report in which fishermen, conservationists, managers and scientists all agreed on the devastating impacts of bottom trawling.  And we participated in the first and subsequent scientific Deep-sea Coral Symposia because we recognized that the beauty, ecological importance and vulnerability of deep-sea corals makes them the poster children of the deep-sea conservation movement.  We have been working on deep-sea corals ever since (Davies and Guinotte 2011, Morgan et al 2006, Morgan et al 2007).  We wrote and gathered the support of 1452 marine scientists on the landmark Scientists’ Statement on Protecting the World’s Deep-Sea Coral and Sponge Ecosystems, which calls for an end to all bottom trawling on vulnerable deep-sea ecosystems.

With generous funding from the Lenfest Ocean Program, we held another scientific workshop that led to another major paper by a group of marine ecologists, fisheries biologists, economists and policy experts on sustainability of deep-sea fisheries (Norse et al. 2012).

DSCC and other advocates are now much better-armed with data, images and the attention of key players throughout the Americas, Europe and the South Pacific.  Europe is on the cusp of a major environmental victory, but it is not over till it’s over.  Will the example of the EU lead to the cessation of bottom trawling in the deep sea, so that others will begin to see it’s in their economic and geopolitical interest to stop?

As someone who had the mind-boggling experience seeing living stalked crinoids on his first deep-sea submarine dive in 1972 in Jamaica, who loves deep-sea corals, sponges, crabs, sea stars and fishes, and who wants all fisheries to be bountiful and sustainable, and who knows what bottom trawling has been doing to the oceans, I am smiling today.