In conservation, it is often said that those countries with larger financial resources should be better stewards of the environment than those whose money is spread more thinly. To investigate how well countries are protecting our oceans, we created SeaStates G20 2014. We wanted to know how the countries with the world’s twenty largest economies compare as leaders in marine conservation, and whether or not they have kept their standing promises to protect our oceans. While there is no framework more ambitious than the Global Ocean Refuge System (GLORES), which calls for strong protection for at least 20% of the ecosystems in each marine biogeographic region by 2030, several international agreements were designed to hold countries accountable for the health of their marine ecosystems. These countries have the financial means, but are they doing their part?

Of the G20 member countries, only five have protected more than 1% of the ocean area in their jurisdiction in no-take reserves. The United States leads with 9.88% of waters strongly protected, and is closely followed by the United Kingdom with 9.73% protection. South Africa comes in third, at 4.46% protected, with Australia next at 4.13%, and Saudi Arabia in fifth, with 2.14% protected. The remaining G20 member countries have strongly protected less than 1% of their oceans: Russia, Germany, Republic of Korea, Indonesia, Italy, Canada, China, Mexico, India, Brazil, Turkey, France, Argentina, and Japan.

In sum, G20 member countries are the most financially able countries in the world; collectively their economies account for approximately 85% of the gross world product. Yet their commitment to protecting their coastal waters is lacking, and capacity is clearly not the issue. 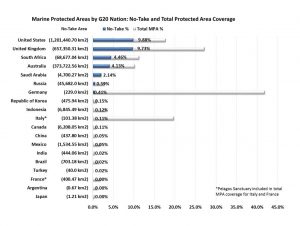 In fact, the United States*, the United Kingdom, and South Africa all have the vast majority of their no-take reserves in remote waters far from centers of population (i.e. the Pacific Remote Islands, South Georgia and the Prince Edwards Islands). These countries will need to improve protection of the heavily used waters closer to home in order to ensure protections across all ecosystems and habitats. South Africa, Australia, and the US state of California have all designated no-take marine reserves closer to home and demonstrate that domestic coastlines can be effectively protected.

Removing remote areas from the analysis, the top four countries for strong marine protected areas in order are Australia, Saudi Arabia, Russia and Germany, although all of them still have under 4% of their waters protected in no-take reserves. When remote areas are removed, only Australia and Saudi Arabia protect more than 1% of their waters and each of the other top three countries (United States, United Kingdom and South Africa) drop to less than 1%.

But we have hope that the tide is beginning to turn. The US state of California, along with South Africa, the United Kingdom, and Australia have all begun coordinated efforts to better zone and protect sections of their nearshore waters. As awareness of the benefits of strongly protected, well managed, and well-enforced no-take areas spreads, we believe implementation will become more common. We are now seeing changes to our ocean ecosystems first-hand, from coral bleaching to alterations in fish distribution, and it has become increasingly clear that parts of the ocean need to be set aside to allow natural processes to continue undisturbed.

3 thoughts on “Are Wealthy Countries Failing to Protect the Oceans?”