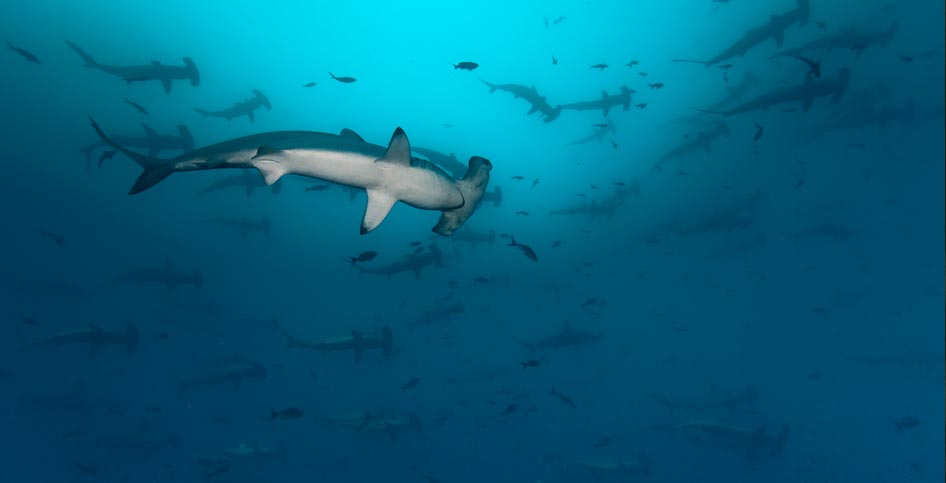 For almost two years, Marine Conservation Institute has spoken and written extensively about the Global Ocean Refuge System (GLORES, pronounced “glories”). During this time, however, we have not been explicit enough about why it is so urgent. GLORES will catalyze strong protection for at least 20% of the ecosystems in each marine biogeographic region of the world’s oceans by 2030, enough to avert mass extinction of marine life. While this, in and of itself, explains why it is so important, below are 10 reasons why GLORES is urgent.

To join the GLORES movement, please call us at 206-686-3038 or email us at HelpWithGLORES@globaloceanrefuge.org.

1. Extinction – 20-25% of well-known marine species are threatened with extinction.[1] Industrialization of the seas is leading to widespread declines in marine life[2] as fishing and human activities have reached every part of the ocean.

“Sharks and their cousins, the rays, predate the dinosaurs. They survived the catastrophic mass extinction that finished off Tyrannosaurus Rex and all the rest, as well the Permian-Triassic extinction that wiped out around 96 percent of marine species. Even the more recently evolved shark lineages, such as the hammerheads, have been around for more than 30 million years. Yet in just a few decades, a quarter of all sharks and rays have become threatened” (source: http://opinion.inquirer.net/83777/death-and-hope-on-the-high-seas)

2. Overfishing – 70% of world fish populations are unsustainably fished. Global fish catch peaked in the 1980s and has been declining for the last 30 years. 90% of large tunas and sharks are gone. Commercial fishing could end by 2048.

3. Bycatch – Every year 7.3 million tons of marine life is unintentionally caught. In some areas of the world the weight of bycatch is 4 times or more that of the intended catch.

4. The triple whammy of ocean acidification, deoxygenation and warming from increased CO2 will have widespread impacts including dead zones, altered currents and changes in productivity.

6. Plastic debris – A recent study published in Science estimates that between 10.5 and 28 billion pounds of plastic entered the oceans in 2010 alone. There has been a 620% increase in plastic production in the last 40 years.

7. Oil spills and chemical pollution – Deepwater Horizon to Mercury in seafood to flame retardants used on clothes and household items. They are all hurting our oceans.

10. Since the 1960s, when the first underwater parks were declared, only ~ 1% of the ocean has been strongly protected in marine reserves. Most marine “protected” areas continue to allow fishing, and other activities that kill or harm sea life such as sea turtles, albatrosses, sea otters and dolphins.

Please join the many people in the GLORES movement today. The oceans urgently need your help!