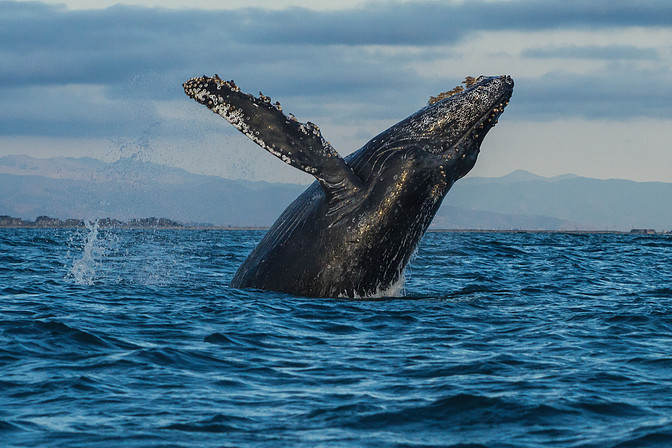 The California coast is a whale-watcher’s paradise. Not only can you find the world’s largest population of the world’s largest whale – the blue whale – here in the northeastern Pacific, but at certain times of year a lucky whale-watcher can spot up to four of the five species of whales that frequent these waters (orca, gray, humpback, fin and blue whales to name the most common visitors).

We all know why we like California – hello sun, surf and Steph Curry – but why do the whales like the Golden State so much, too?

For starters, the coastal waters of California have an unusually large amount of food. Cold, nutrient-rich, deep-water gets pushed up the continental shelf to the surface through a process called “upwelling”. This upwelling, combined with the cold, southerly-flowing California current, creates highly productive waters for krill, which are small crustaceans that are an important food source for baleen whales. Many whale populations feed predominantly in the Earth’s polar regions, where the water is always cold and productive. Thus, these feeding grounds in the relatively low-latitude California waters are highly unique and important, as they may be one of the only significant sources of food for some of these whales outside of the Arctic.

Another important feature of the California coast is the presence of seamounts. Seamounts are underwater mountains that rise to a summit near the surface, and their presence creates a high-biodiversity ecosystem in the middle of the deep, relatively low-biodiversity open ocean. As a result, seamounts attract large animals of all kinds, including sharks, turtles, seals, sea lions, dolphins and most likely, whales, too.

Scientists have just begun to study the association between whales and seamounts; findings in the South Pacific suggest that seamounts play significant roles for humpback whales, possibly serving as navigational landmarks, breeding locations and rest areas. Future research should investigate whether the many seamounts off the coast of California play a similar role for the globally important whale populations found in these waters.

Seamounts are important for more reasons than just the marine mega-fauna they attract. One of the reasons they attract large animals in the first place is the abundance of the small plants and animals that form the basis of the seamount ecosystem. Corals and other invertebrates, such as sponges, settle and grow on seamounts and literally create the ecosystem from the bottom up. Many of the invertebrate species discovered on seamounts do not exist anywhere else in the world; some harbor unique marine life that can be found nowhere else on Earth.

Furthermore, many of the California seamounts are so deep and remote that researchers haven’t even fully surveyed them yet. As such, the potential to discover new, undescribed marine life on the California seamounts is extremely high. The fact that we still don’t understand their full ecological value, combined with the important role that we already know seamounts play should make their protection a conservation priority.

One thought on “Going in for the Krill: Why Whales Love the California Coast”