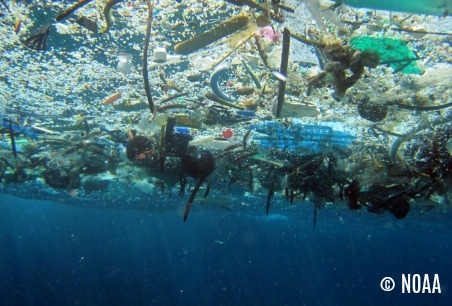 Washington, D.C. — Marine Conservation Institute, a leader in securing strong protection for the oceans’ most important places, applauds the bipartisan hearing today in the Senate Commerce Committee’s Subcommittee on Oceans, Atmosphere, Fisheries and Coast Guard headed by Senators Dan Sullivan, (R-AK) and Gary Peters, (D-MI). Witnesses from the U.S. State Department and the National Oceanic and Atmospheric Administration (NOAA) Marine Debris Program discussed the domestic and international extent of the debris problem that is choking our oceans and hurting marine life. Members of Congress are genuinely cooperating in the search for solutions.

According to a recent study in Science Advances, 6.3 billion metric tons of plastic waste has been generated since 1950, with millions of metric tons entering the ocean each year. This problem is clearly growing and plastic marine debris is accumulating. Because plastics are made to be durable, most types do not break down quickly or at all in any environment. In the ocean, plastic generally breaks into smaller fragments and shorter fibers rather than its constituent chemicals.

Dr. Lance Morgan, president of Marine Conservation Institute said, “Having worked to pass the current version of the Marine Debris bill in 2013, we are pleased to see a bipartisan effort to update and improve this small but valuable federal program.” He continued, “Ocean-going plastic and other debris impacts our nation’s near pristine marine reserves in the Pacific and our shorelines from Alaska to California and the Atlantic and Gulf coasts. It harms marine mammals, seabirds, sea turtles and even the seafood we eat. It’s time to reduce the flow of plastic and other marine debris into the ocean. The ocean cannot continue to be the world’s waste dump.”

In 2010, an estimated 5 million to 13 million metric tons of plastic entered the ocean. Assuming 10 million metric tons per year, that is enough plastic to cover 143 sq. mi. of ocean with a layer of high density polyethylene (HDPE) 1 inch thick. A 1/8 inch thick layer would cover an area about the size of Rhode Island. HDPE is widely used for plastic bottles, sewer pipe, food storage, lumber, etc. With that much going into the ocean year after year, it is unsurprising that the material has been found everywhere from the polar deep sea to remote, uninhabited Pacific islands. Given the staggering amount of plastic now in our environment, a New York Times reporter speculates that it may someday define our era as the “Plastocene.”

Marine Conservation Institute is a team of highly-experienced marine scientists and environmental policy advocates dedicated to saving ocean life for us and future generations. The organization’s goal is to help create an urgently-needed worldwide system of strongly protected areas—the Global Ocean Refuge System (GLORES)—as a strategic, cost-effective way to ensure the future diversity and abundance of marine life. To enhance marine protection efforts in the US and around the globe, Marine Conservation Institute also built the world’s most comprehensive online marine protected area database.

For more information on Marine Conservation Institute, go to: