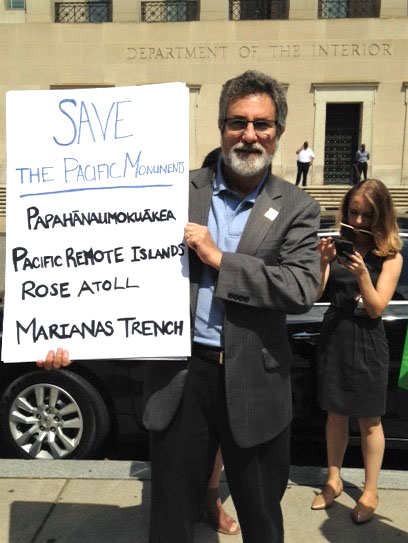 Seattle, WA — Secretary of Interior Ryan Zinke today submitted undisclosed recommendations to the White House on the fate of two dozen land and marine monuments culminating a process begun in April when President Trump issued Executive Order 13792. The unprecedented review questioned the validity and need for 21 land monuments and 5 marine monuments created or expanded by every president since Bill Clinton. Over 2.8 million public comments were filed during the Department of Interior comment period. According to a recent analysis of all the comments, 98.2% were in support of continued protections for these special places and against elimination or weakening the national monuments. When Marine Conservation Institute randomly sampled public comments solely about marine monuments, or blue parks, on the Department of Commerce website, 99 out of 100 comments supported the marine monuments. Approximately 380,000 comments were filed specifically on marine monuments.

Dr. Morgan continued, “I truly believe that an attack on one of America’s national monuments is an attack on all of them. This review has been a sham from the start: its purpose was not to hear public opinion, which overwhelmingly supports our national monuments, but to shut the public out as a favor to special interests that want to exploit public lands.”

Dr. Morgan condemned the Department of Interior review and recommendations saying, “Shrinking these areas or opening these vital ecosystems to commercial development of any kind will cause irreversible damage to marine life and the coastal communities that depend on it and will result in these areas becoming ‘paper parks’ – areas that look good on paper but do nothing to maintain our precious environment. Their protection should never have been questioned to begin with – the lack of transparency and secrecy around specific recommendations speaks volumes about their intention to proceed with the biggest attack on our public lands in decades.”

Marine Conservation Institute is dedicated to saving ocean life for us and future generations. The organization’s goal is to help create an urgently-needed worldwide system of strongly protected areas—the Global Ocean Refuge System (GLORES)—as a strategic, cost-effective way to ensure the future diversity and abundance of marine life. To enhance marine protection efforts in the U.S. and around the globe, Marine Conservation Institute also built the world’s most comprehensive online marine protected area database, MPAtlas.org.

For more information on Marine Conservation Institute, go to: