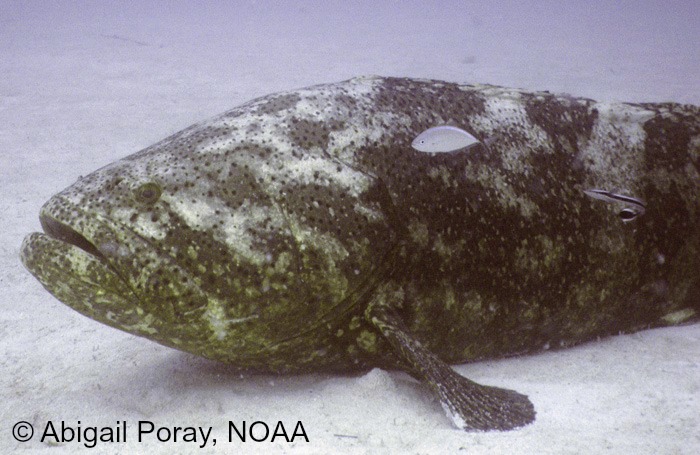 Marine Conservation Institute strongly supports no-take rules for the Atlantic goliath grouper. The Atlantic goliath grouper is a large saltwater fish, the largest of the Atlantic groupers, which can reach up to 8 feet long and can weigh between 500-800 lbs. when fully grown. They typically remain solitary and live in deeper water[i] but, when spawning,  goliath groupers can be seen in large aggregations off the Florida coast. These events attract SCUBA divers from all over the world for their huge natural spectacle.[ii]

The goliath grouper was once a popular target for commercial fisheries, so much so that their population rapidly declined throughout its entire range during the 1970’s and 1980’s. It was labeled commercially extinct in the late 1980’s and, in 1990, a federal and state fishing ban on the species was implemented in Florida, Alabama, Mississippi, Louisiana and Texas. This law meant that if anyone caught a goliath grouper, they had to immediately return it to the water free, alive, and unharmed.[iii]

Now, the Florida Fish and Wildlife Conservation Commission (FWC) is considering changing its management strategy for the Atlantic goliath grouper. Possible changes may include allowing the retention and killing of 100 goliath groupers per year over a 4 year period.[iv] Scientific population models analyzed by the Southeast Data, Assessment, and Review (SEDAR) in 2016, suggest that the relative stock abundance has been declining since 2012.[v] These models suggest that the population is no longer in “overfished condition” and its decline is thought to be the result of temperature changes and harmful algal blooms. Fishing, even “limited take” fishing, would negatively impact this declining population. Another possible change would allow a slot limit catch of 120-170 cm (45-65 in) TL, which are young individuals (5-7 years old) that have only recently reached sexual maturity. We think that slot limits are a poor choice as they reduce the number of individuals that grow large, which could become the most prolific spawners and boost  population recovery.

These management changes come from local fishermen’s concern that allowing goliath grouper populations to increase would result in fewer fish and lobsters of commercial and recreational value. These fishermen believe that goliath groupers are eating marine life that they want to catch. However, leading marine scientists studying the goliath grouper at Florida State University, Chris Koenig and Felicia Coleman, have examined goliath grouper stomach contents and found that lobsters made up less than 1% of their diet[vi]. Instead, fish that eat lobsters are commonly goliath grouper prey, thereby benefiting these lobster populations. In their 2011 study co-authored with Kelly Kingon, Coleman and Koenig also point out that, “the indigenous goliath grouper has a positive effect on the biodiversity and abundance of associated reef fishes, a result expected from principles of evolutionary ecology.”[vii] Therefore, healthy goliath grouper populations are important to both the Florida marine ecosystem and economy.

Fishing is not the only cause of goliath grouper mortality or the only obstacle to their recovery. Coastal mangrove loss has reduced habitat for juveniles while the loss of reefs is impacting older individuals. Goliath groupers are also susceptible to large scale mortality events, like harmful algal blooms and changes in temperature. Due to their cold sensitivity, the goliath grouper’s range is restricted to southern and deeper waters where temperatures remain more stable around 15°.[viii] Thus, re-opening the goliath grouper fishery could jeopardize their recovery and it is crucial that the FWC proceeds with caution.

If you’re concerned about the fate of the goliath grouper, consider submitting a comment to FWC here.

[vii] Koenig, C.C., F.C. Coleman, and K. Kingon (2011). Pattern of recovery of the goliath grouper Epinephelus itajara population in the southeastern US. Bulletin of Marine Science 87: 891-911