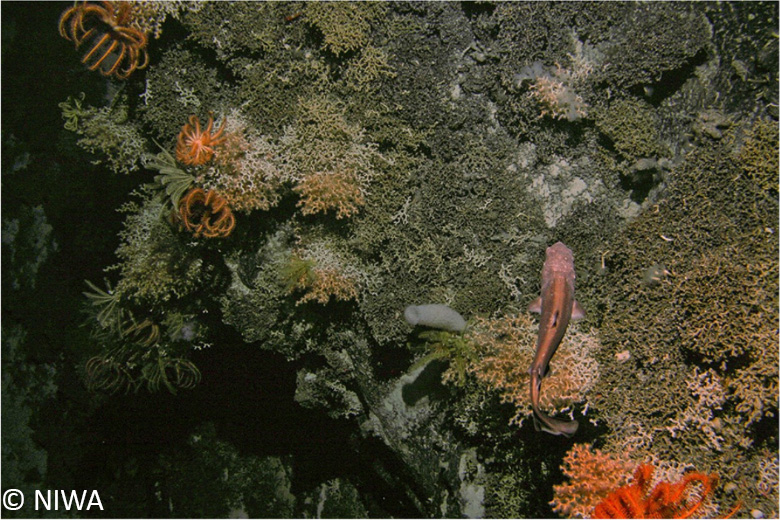 Seamounts are underwater mountains rising thousands of feet from the bottom of the ocean. Due to their size and shape, seamounts exert a strong influence on local currents that results in nutrient enrichment and increased food supply. As a result, these massive features are often highly productive ‘oases’ in the deep sea, supporting a large diversity of species including functionally important deep-sea corals (Stocks and Hart 2007). Deep-sea corals provide essential habitat structures for a large number of associated organisms, including many commercially important fish. These communities are currently at risk from a number of threats including climate change, oil and gas extraction, and benthic fisheries.

Countries around the world have agreed to protect and conserve fragile, deep-sea coral habitats by identifying them as vulnerable marine ecosystems (VMEs). A major obstacle to identifying VMEs is the vast amount of seafloor that remains unexplored due to the prohibitive time and expense of surveying the deep sea. Coupled with the relative rarity and patchiness of many corals and other deep-sea organisms, locating and protecting these communities can be like finding the proverbial needle in a haystack.

Habitat suitability models are tools that help scientists better map the areas where these mysterious and spectacular deep-sea ecosystems will likely be found. The models link environmental data with locations that are already known to be inhabited, allowing us to predict where we expect to find new communities in unexplored areas. Since these models can be developed using limited field surveys, and then used to predict distributions over large areas of the seafloor, they are particularly useful in improving our understanding of deep-sea populations.

In a recent publication that I coauthored with leading scientists at the National Institute of Water and Atmospheric Research in Wellington, New Zealand, the distributions of several deep-sea organisms were modeled on the Louisville Seamount Chain off the coast of New Zealand. The Louisville Seamount Chain, comprised of more than 80 seamounts and spanning a length of over 4,000 km, is home to an impressive array of benthic life including corals, sea stars, feather stars, and fish. Historical bottom trawling by the orange roughy fishery poses a significant threat to these fragile creatures (Clark et al. 2016), making it imperative to better understand their distribution throughout the region.

We developed habitat suitability models to predict the spatial distribution of three groups of organisms: the stony coral Solenosmilia variabilis, sea stars (Brisignidae), and feather stars (Crinoida). Sea stars and feather stars are classified as ‘indicator’ species – organisms that help identify VMEs based on their association with habitat-forming corals. Our models showed that these three groups of organisms inhabit small patches on the steep sides and ridges of numerous seamounts, whereas the summits were generally predicted to be unsuitable. These results have significant implications for the spatial management of fisheries throughout the Louisville Seamount Chain, and we are currently using these models to advocate that the South Pacific Regional Fisheries Management Organization act to better protect these fragile deep-sea coral ecosystems.

Marine Conservation Institute is dedicated to protecting seamount ecosystems, and actively works to support the development of deep-sea protected areas around the world. The institute’s largest initiative, the Global Ocean Refuge System (GLORES), is designed to catalyze strong protection for 30% of the ocean in each unique marine region. The Global Ocean Refuge System is made possible by contributions from ocean advocates like you.

One thought on “Needle in a haystack: identifying vulnerable marine ecosystems in the deep sea”