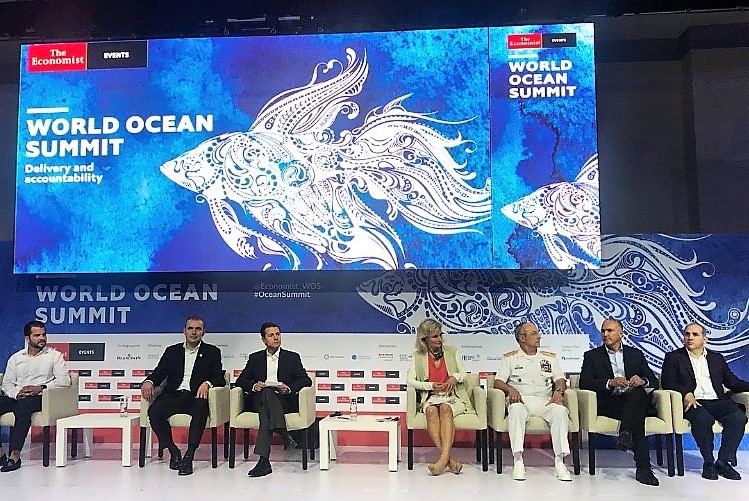 I had the great pleasure of participating in The Economist’s World Ocean Summit earlier this month with nearly 400 other ocean stakeholders and conservation leaders. The meeting, billed as an opportunity to learn more about commitments made by businesses and governments to advance the “Blue Economy”, was a chance to check in on progress made since past summits. Throughout the conference, the belief that business can align with ocean conservation in ways that help regenerate ocean life was kept front and center.

What is the blue economy? Historically the ocean economy referred to any economic activity that derived from human uses of the ocean, but this definition failed to capture the value of natural capital, or the ecosystem services that they provide. Healthy oceans produce oxygen, moderate our climate, and protect coastlines from floods and storms and provide many other benefits. The Blue Economy, as recently described by Mark Spalding, refers to “those activities that improve the human relationship with the ocean” and, importantly, it accounts for the ecosystem services that benefit marine biodiversity and humans.

From a conservation perspective, the challenge with a “Big-Agenda” meeting is getting past the talking points to concrete action. What progress has been made? I went to the meeting curious to learn more about the current state of affairs and where investments are being made in our Blue Economy.

It was a new kind of meeting for me; science conferences, which I attend more frequently, are often dedicated to understanding and diagnosing problems, or elaborating details upon which we can build a better frame for the “problem”. Science meetings are not without ideas and possible solutions, but they often leave solving problems and implementing solutions to others. Operationalizing a new idea is more the realm of businesses and conservation groups and often requires start-up investment from philanthropies and governments. Right now, the Blue Economy is still new enough that making investments can seem risky, or as Citigroup Managing Director Michael Eckhart poignantly phrased it, “To get capital flowing to your agenda, you have to address one thing: the risk of investing someone’s capital in your solution. The risk for the ocean is that no one owns the asset.”

The World Ocean Summit’s blend of business accelerators, investors, scientists, government officials and conservationists had a much more “can do” attitude than most meetings, and The Economist should get praise for the unique format of bringing together experts across so many disciplines. They are breaking down silos between sectors, and that should help ocean conservation. I would have liked to see the panels delve deeper into the “ecosystem”, which is necessary to tackle large scale ocean conservation, and emphasize the urgency that is needed to address these issues.

Politicians helped provide some urgency, as Iceland’s President Gudni Jóhannesson commented, “… it’s clear that what was previously tolerated, won’t be going forward.” Similarly, Canada’s Minister of Environment and Climate Change, Catherine McKenna, highlighted that the Trudeau government is moving forward aggressively to meet the 10% marine protected area target by 2020. It was heartening to hear these endorsements for action on behalf of our oceans, but as a conservationist I can’t help feeling the clock is ticking a lot faster than governments and businesses are moving. Extinction rates are increasing and we are looking at ocean warming that will overwhelm most of our coral reefs in the next 30 years.

A positive attitude does not diminish the formidable challenges we face. Climate change is on a near runaway trajectory even with the growth of alternative energy and the Paris Agreement. Fish are being globally depleted despite increased investments in sustainable fishing, as governments continue subsidizing destructive fishing. Plastics are choking marine life and waterways. These problems will not turn around immediately or soon. They require political will, and that means strong public support with voters holding their leaders accountable.

The Summit’s key takeaway from my perspective is that we need to dramatically increase our investments in the ocean – it makes economic sense. One positive development was a set of guidelines for investment in sustainable fisheries as well as sustainable finance principles for the blue economy, which European Commissioner for Maritime Affairs and Fisheries Karmenu Vella called “perhaps [the European Commission’s] most important work” at the summit, because of their potential to rally the resources needed for sustainable development of the ocean economy. These should help investors get comfortable with bigger investments in our oceans.

Globally the ocean is worth USD $24 trillion, and generates at least $2.5 T annually. Protecting this natural capital is good business, and has high economic returns. It is well past time that we pool the resources of the fishing community, coastal tourism and other businesses to invest in marine protected areas (MPAs) – if for no other reason than the insurance these areas will provide in the face of growing threats to our ocean. The insurance value of ocean conservation is enormous; companies recently lost billions to hurricanes, and healthy coral reefs and mangroves are critically important buffers to storms.

Peter Thompson, the UN Ocean Envoy from Fiji, urged World Ocean Summit participants to tackle Sustainable Develop Goal 14 in his address. While the SDG aims at a 10% MPA target, former President of Costa Rica, Jose Maria Figueres, now co-chair of Ocean Unite, urged the meeting attendees towards the more ambitious target of 30% MPA coverage. This goal is in line with our own Global Ocean Refuge System (GLORES) initiative, which is designed to catalyze strong protection for 30% of the ecosystems in each marine biogeographic region of the world’s oceans by 2030. It is a strategic, science-based way to safeguard marine ecosystems and will enable humans to recover marine life for us and future generations. Global Ocean Refuges are recognized for the qualities that lead to long-term conservation success, and act as an insurance policy in a rapidly changing environment.

Many Latin America countries, including Brazil, have recently established large MPAs. In fact, Chile’s government led by President Bachelet exceeded the 30% target, protecting more than 40% of its Exclusive Economic Zone in marine protected areas. Fittingly, as the meeting was in Mexico, one of the biggest highlights for the blue economy came from its recent progress.

Mexico recently designated North America’s largest MPA – the Revillagigedo National Park – and has established an insurance policy for its Caribbean coral reefs – a global first. And, though politicians from many countries highlighted their commitments to ocean conservation, perhaps none so eloquently described their direction as Mexican President Peña Nieto in his 4 recommendations to protect our oceans:

“To be successful you have to involve all the parties and make them participants in our causes. This is a struggle that commits us all and this Summit that brings together governments, businessmen, academics and leaders of civil society is a clear example of this. From the imposing Mexican Caribbean, one of the most beautiful seas in the world, I call for all of us to participate in the mission of protecting our seas and oceans while maintaining the balance between exploitation and care for the environment.”

I couldn’t put it better myself.