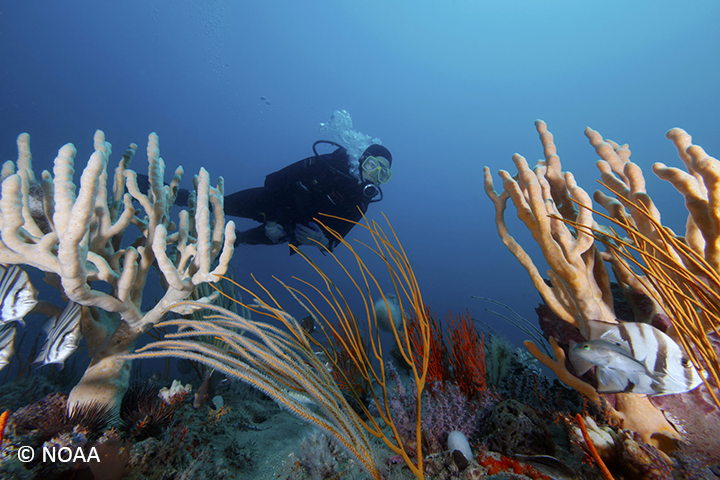 Tropical coral reefs are some of the most diverse and productive ecosystems on our planet. Often called the ‘rainforests’ of our oceans, coral reefs host incredible levels of biodiversity and provide important ecosystem services that many organisms – including humans – rely on. Globally, coral reefs cover less than 0.1% of our seafloor, but provide habitat for approximately 25% of all marine life (Thornhill 2012). At the same time, these ecosystems provide functions that are key components of healthy oceans, including nutrient cycling, as well as services that directly benefit humans (e.g., coastal protection, fishing, sand production, tourism) (Suzuki and Kawahata 2003; Sheppard et al. 2005). All told, coral reefs were estimated to contribute $30 billion in net benefits to the global economy in 2003 (Cesar et al. 2003) and that value has only grown with our understanding of corals in the years since. Unfortunately, these essential ecosystems face serious threats worldwide today.

Many stressors are endangering coral reefs’ diverse but fragile ecosystems. These hazards include coastal sediment and nutrient runoff, destruction from development and extractive activities, invasive species, and climate change impacts such as warming, deoxygenation, and acidification (Fabricius 2005; Hoegh-Guldberg et al. 2007). These human-induced disturbances threaten the corals, fish, and other marine organisms that depend on reefs while jeopardizing the essential services these habitats provide. It has been estimated that over 20% of the world’s tropical coral reefs have been destroyed, and human activities already threaten 75% of remaining reefs (Burke et al. 2011). Marine protected areas offer a proven way to stem these losses and recover corals.

Marine protected areas (MPAs) shield coral reefs and other marine ecosystems from some human threats. Many existing MPAs, however, are multiple-use areas that still allow extractive activities, such as commercial fishing and oil and natural gas drilling. In contrast, strongly protected reserves—often called ‘no take’ areas—generally do not allow extractive activities, affording these ecosystems a much higher level of protection. Strong MPAs are effective at restoring fish populations (Almany et al. 2007) as well as preventing coral losses (Selig and Bruno 2010), and are extremely effective conservation tools when designed and managed well. By reducing or eliminating disturbance from overfishing and other extractive activities, corals and other reef organisms also become more resilient to ubiquitous and hard-to-manage stressors like climate change and natural events (e.g. hurricanes, disease).

Currently, only 3.7% of the global ocean occurs within MPAs, and only 2% occurs within strong protected reserves. While this figure marks a major increase from the <0.1% that was protected at the turn of the 21st century, global conservation goals – like the Aichi Biodiversity Targets – hope to protect 10% of our oceans by the year 2020 and 30% by the year 2030. It is not enough to simply reach a certain percentage of protected waters – we need to ensure that a representative biogeographic sampling of ecosystems is protected. With that caveat in mind, it’s still instructive to explore current protections for the world’s coral reefs.

Globally, coral reefs cover a total area of 151,585 km2. Currently 32.2% (48,754 km2) of coral reefs are protected in some kind of MPA: 22.3% (33,753 km2) exist in MPAs generally, and strongly protected reserves safeguard an additional 9.9% (15,000 km2) (Figures 1 and 2). Therefore, coral reefs already enjoy a much higher level of protection than other habitats (e.g., seamounts), raising the question of whether conservationists should increase focus on tackling threats that MPAs will not fully mitigate, such as climate change, or on developing MPAs for less-protected ecosystems. It is important to note, however, that less than 10% of coral reefs have strong protection, and a large portion of the existing coral reef MPAs are geographically clustered in select regions – leaving coral reefs in other areas less well protected.

We recently expanded the Global Ocean Refuge System with a new project, the GLORES Accelerator, to help ensure new MPAs safeguard marine biodiversity. Our first Accelerator collaborations are with Sin Azul No Hay Verde and Fundación Rompientes, two organizations that are making ocean protection progress in South America. Through improving existing MPAs and encouraging strong new reserves, we can save our ocean’s wildest places, from tropical reefs to the deep seafloor.

Donate today to double your impact!

Fabricius KE. 2005. Effects of terrestrial runoff on the ecology of corals and coral reefs: review and synthesis. Marine Pollution Bulletin 50(2):125-46.

Suzuki A, Kawahata H. 2003. Carbon budget of coral reef systems: an overview of observations in fringing reefs, barrier reefs and atolls in the Indo‐Pacific regions. Tellus B. 5(2):428-44.

One thought on “Status Watch: How Well Are Coral Reefs Protected Around the World?”