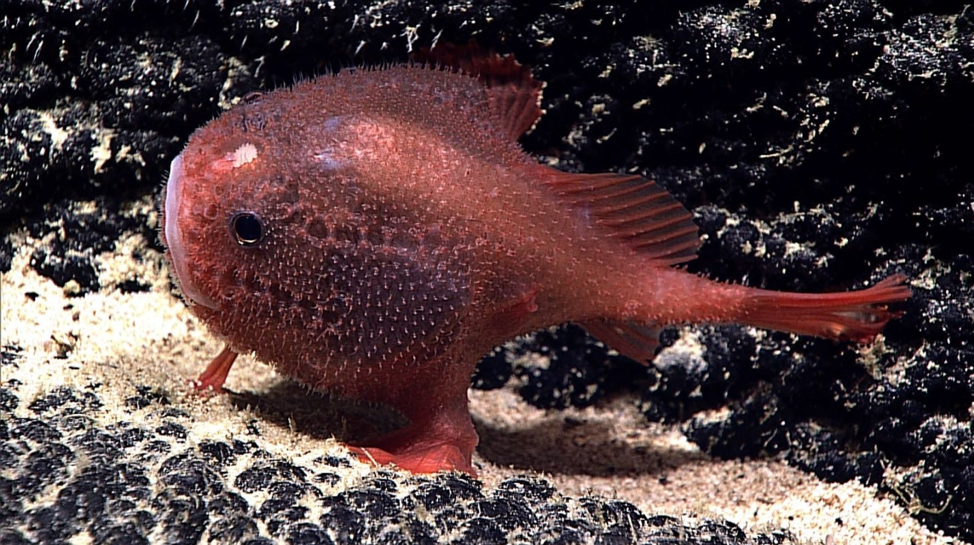 Featured Pic: Chaunacops coloratus, a rare species of anglerfish discovered in 1891and filmed in the wild for the first time at the Taney Seamounts. Photo courtesy of NOAA. 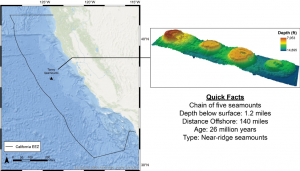 The Taney Seamounts are a chain of five seamounts spanning a distance of 33 miles across the seafloor off the coast of California. The seamounts are an example of near-ridge seamounts, which generally form near fast-spreading ridges on diverging tectonic plates. Fast is a relative term – the ridge near the Taney Seamounts has a spreading rate of 4.9 cm per year! The Taney chain formed from a series of eruptions from shallow, large-volume magma chambers that eventually collapsed, forming the calderas seen today. Calderas are large sinkholes that form when volcanoes collapse in on themselves, generally because the now-empty magma chamber can no longer support the massive weight of the volcanic rock above. The oldest and largest volcano (nine miles across and 6,500 feet tall) in the Taney chain has undergone three large caldera collapses in its history, leaving the seamount with a unique half-moon shaped summit. The other seamounts have smaller calderas, some of which were partially filled in with subsequent lava flows. One of the summits has evidence of a somma, a unique summit formation that is created when an old caldera is filled in with a shield created by younger lava flows. Due to their morphology, scientists initially believed that the seamounts were relatively young. However, subsequent argon dating revealed that they are approximately 26 million years old.

Like other seamounts off the coast of California, the Taney Seamounts are highly productive ‘oases’ in the deep sea, providing ecologically crucial habitats that support a large diversity of organisms. In part, this stems from the large effects that the seamounts exert on local currents, providing critical resources for benthic organisms including sediment and waste removal, nutrient and food influx, and larval dispersal. A 2010 expedition to the Taney Seamounts documented a large diversity and density of seafloor life including cold-water corals, sponges, brittle stars, sea stars, mollusks, sea cucumbers, anemones, sea urchins, and worms. The ecological patterns uncovered in the expedition may also help shed light on why seamounts are such havens for benthic diversity. In many deep-sea habitats, the abundance of organisms decreases with depth – often believed to relate to the reduced rain of food and nutrients from more productive surface waters. However, the Taney Seamounts survey discovered that abundance did not change with depth. Instead, different depth zones on the seamounts were characterized by different, but equally dense, assemblages of seafloor animals. For example, sponges began to replace corals at deeper depths, being theoretically better equipped to handle the harsher physical conditions, but still filling a similar ecological niche.

The Taney Seamounts are also home to a number of newly discovered and rare species. The chain is home to a rare species of anglerfish (Chaunacops coloratus), which was described in 1891 and in the wild for the first time at Taney Seamounts. Observations from an expedition to Taney Seamount also contributed to the discovery of a new and rare species of sea jelly (Tiburonia granrojo), which can grow to be 30 inches across! In 2012, a new species of acorn worm (Saxipendium implicatum) was described, with evidence suggesting that it is endemic to Guide, Davidson, and Taney Seamounts. If human activity had decimated life on just these three seamounts prior to 2012, this species could have become extinct before we even knew it existed!