“Yeah, as long as the Arctic stays cold,” – so ends the 1958 horror film The Blob (https://www.dailymotion.com/video/x796ljc). Steve McQueen’s character is expressing his dissatisfaction that the now frozen Blob is once and for all dispatched (in the movie the Air Force delivers the frozen blob to the Arctic ending its rampage). The irony of this statement is not lost on those of us now feeling the impacts of a different, ocean “blob”.  We are now in the second emergence of a very real “blob” in the north Pacific; one that is equally horrific.

The Arctic is warming, dramatically so, and the blob is back.  After a short hiatus from the 2014-16 ‘blob’ an event that led to unusually warm North Pacific waters, and the death of thousands of marine mammals, seabirds and other wildlife, the blob’s second act may be even worse.

The ocean is taking the heat for our tailpipe and other CO2 emissions. The Intergovernmental Panel on Climate Change (IPCC) Special Report on the Ocean and Cryosphere in a Changing Climate reveals the extent of the crisis facing humanity as the ocean and its services begin to show signs of collapse.

We may think of heatwaves in the context of terrestrial ones, but marine heatwaves are increasingly common and the “blob” is just one manifestation of it. Around the world we are seeing coral bleaching (the most well-known manifestation of ocean heating), as well as the dramatic loss of the ice-covered poles (cryosphere).

We know that reducing CO2 emissions is the answer.  We need to move as rapidly as possible to carbon free energy sources, but there are so many other things we can do to help provide us time for this transition.

Greta Thunberg’s admonishment, “How dare you pretend that this can be solved with just ‘business as usual…You are failing us” lands squarely on target. We owe it to our children and the other occupants of our planet to do more, in fact we owe everything in our power to address the climate crisis.

Marine Conservation Institute’s focus on ocean protection also provides a critical role. Yes, we must change our behavior, but there is also a need for us to protect large areas of the ocean – 30% or more! One under-appreciated role played in this drama is that played by the great whales.  The rallying cry of the 1970’s was “Save the Whales” primarily due to the growing appreciation of these sentient and large mammals, who care for their young as humans do and live in complex social groups. Today we know how important whales are to the carbon cycle in the ocean. Whale “poop” delivers nutrients from the deep to the sunlit surface waters spurring on plankton blooms. Unfortunately, whale populations are a fraction of their historic numbers in many parts of the world, 25% of the number that were around before whaling. If recovering whale populations could improve plankton populations by just 1% that would enable removal of hundreds of millions of tons of additional CO2 a year.  And what if we could recover large tunas and sharks that are now less than 10% of historic populations.  Nature can work for us in capturing CO2 if only we give it a chance to recover and regenerate ocean life. A global network of Blue Parks will help us achieve this future and we need you to join us! 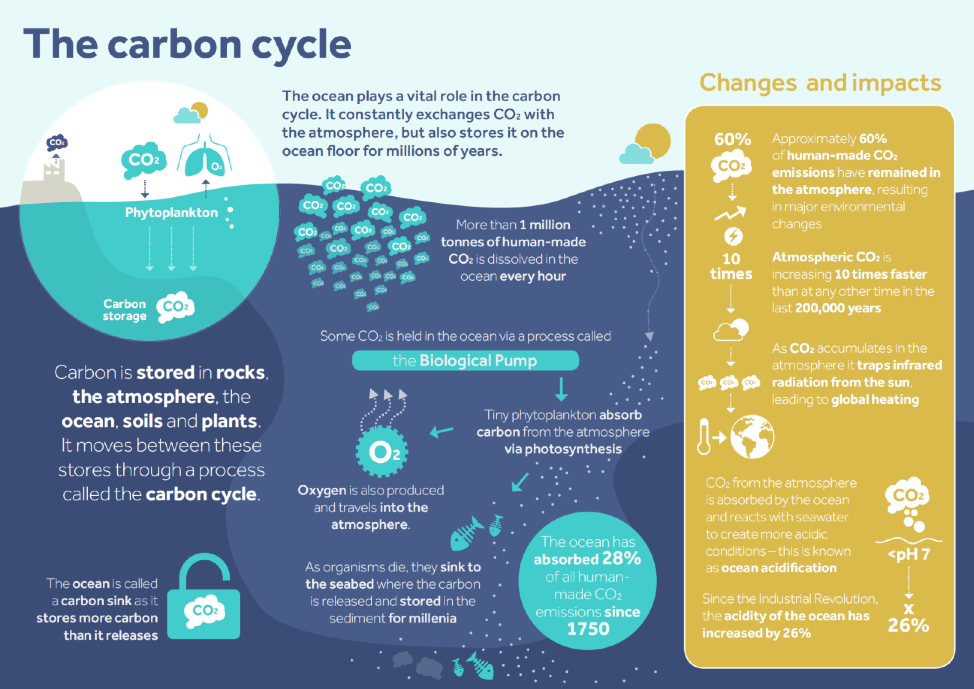 For more information on the IPCC’s report visit – https://www.oceanprotect.org/category/key-activities/

For more information on getting involved in Climate Actions – https://350.org/get-involved/