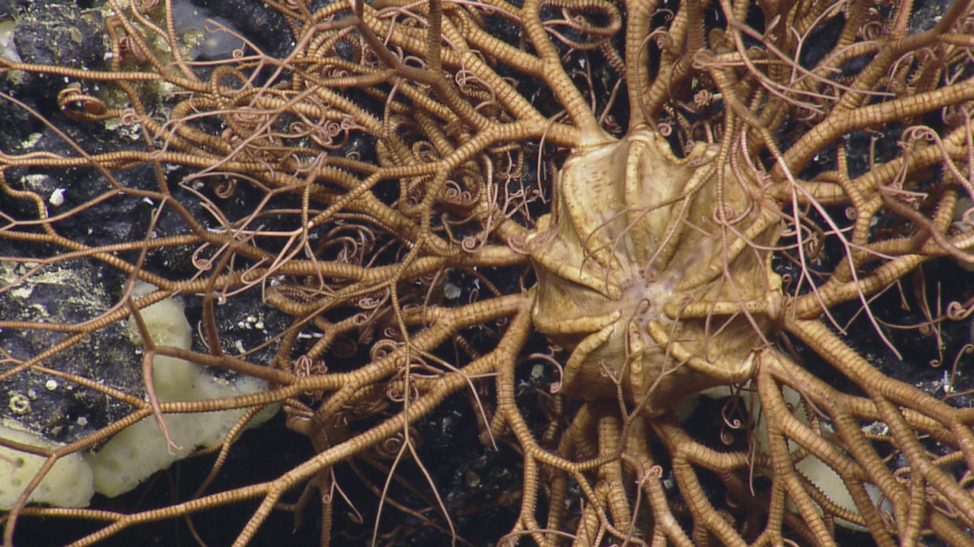 Marine Conservation Institute recently participated in the E/V Nautilus NA114 field expedition that explored numerous seamounts across the Central Pacific Ocean. The expedition focused on collecting baseline biological, geological, chemical, and mapping data on poorly known or completely unexplored seamounts. Over the course of 22 days at sea, the expedition conducted seven remotely operated vehicle (ROV) dives totaling over 156 survey hours, mapped more than 12,000 square miles of seafloor, and collected 160 samples including water, corals and sponges, and a variety of rock types. The main objective was to survey unexplored areas of the Pacific Remote Islands Marine National Monument (PRIMNM) in order to support conservation and management decisions within and around the monument, as well as to improve our scientific understanding of these remote and poorly studied seamount ecosystems. The expedition sailed from American Samoa to Hawaii, and surveyed seamounts in and around Howland Island, Baker Island, Johnston Atoll, and international waters.

Howland Island, like most of the areas surveyed on the expedition, is located within PRIMNM. The monument was established in 2009 by presidential proclamation, and later expanded in 2014 to its current size of 490,343 square miles. It encompasses seven islands and atolls, including Howland Island, Baker Island, and Johnston Atoll. PRIMNM provides important protections for a wide array of marine life including corals, sponges, fish, sea turtles, seabirds, and marine mammals. Howland Island is an uninhabited atoll first colonized by Polynesians and later claimed by the United States to pave the way for extensive guano mining. The tiny island has since gained notoriety as the last planned stopover for Amelia Earhart before she went missing on her attempt to fly around world. As a result, the region has seen extensive archaeological searches, including a recent E/V Nautilus search of the neighboring Nikumaroro Island.

The expedition explored a previously unsurveyed ridge on the northwest side of Howland Island as well as an unnamed, unexplored seamount north of the island. On both surveys, the team observed dense colonies of cold-water corals and sponges, including a massive, six-foot-tall Madrepora oculata colony thriving at a depth of almost 3,200 feet. It is rare to see such large stony corals in waters this deep in the Pacific Ocean because the low pH of deep waters throughout the region makes it difficult for corals to produce their hard skeletons. The team also had exciting observations of a Prickly shark (Echinorhinus cookei), sea spiders, dumbo octopuses, as well as the first observation of a rare gromiid protist (possibly Gromia sphaerica) within PRIMNM. Gromia are large spherical testate amoebas (protists that have a shell known as a ‘test’) that can grow up to 1.5 inches in diameter despite consisting of only a single cell. Incredibly, they may be the oldest living fossil ever discovered – some scientists believe that the trails they leave in the seafloor match Australian fossils dating 1.8 billion years ago!

Baker Island is a small atoll (<1 square mile) located approximately 42 miles southeast of Howland Island. Like Howland Island, it was claimed by the United States under the Guano Islands Act of 1856. After mining rights were sold to a British company in 1886, the jurisdiction of the island was disputed leading the United States to briefly colonize the island as part of the American Equatorial Island Colonization Project. Subsequently claiming the island by executive order in 1936, the United States abandoned the settlement in 1942 due to the start of World War II. Today, the island is uninhabited except for occasional visits from U.S. Fish and Wildlife managers and scientists.

The expedition explored the southwest slope of Baker Island and a neighboring unnamed seamount just southeast of the island. It uncovered benthic habitats similar to those at Howland Island, with ancient basalt flows and boulders proving habitat for vibrant coral and sponge ecosystems housing a large number of associated anemones, crabs, crinoids, sea urchins, and fish. In addition, the team had mesmerizing encounters with a billowing Cirroteuthid octopus – one of several possible new species discovered on the expedition – and a massive Deepstaria jellyfish. Deepstaria jellyfish lack the stinging tentacles that most jellyfish use to capture prey, instead relying on their ability to close their bell-like body around potential prey items.

Johnston Atoll encompasses four islets, two of which were artificially created via dredging. The atoll has a long history of U.S. military usage, including many environmentally destructive practices such as the testing, storage, and disposal of nuclear, biological, and chemical weapons. The atoll is now administered by PRIMNM and the U.S. Fish and Wildlife Service, and provides a number of important habitats for corals, sponges, fish, a large number of seabirds, green sea turtles, and marine mammals including monk seals and Cuvier’s beaked whales.

The expedition conducted two ROV dives at Johnston Atoll, a deep dive spanning depths between 5,600–8,500 feet, and a shallower dive extending from 300–5,900 feet. On the shallow portion of the atoll, the team found thriving mesophotic communities that included crustose coralline algae, moray eels, and an array of coral species not observed in deep waters. The deeper slopes of the atoll were dominated by extensive sponge gardens populated by Aspidoscopulia sp. and stalked Euplectellidae sponges, as well as corals including numerous Isididae and Chrysogorgia colonies. Based on a mapping survey conducted the night before, the team was particularly interested in a steep terrain feature at a depth of approximately 4,200 feet. Steep slopes accelerate local water currents, and are excellent habitats for suspension feeders like corals and sponges that rely on currents to transport food. As expected, the terrain feature housed a vibrant biological community dominated by Plexaurid corals, crinoids, and anemones. However, the team also discovered a rare geologic formation – a series of hexagonal basalt columns known as columnar basalt. These columns form when lava cools and contracts, resulting in regularly spaced fractures in a process known as columnar jointing. These features are also observed on land, with the most well-known example being Devils Tower, Wyoming.

While the focus of the expedition was surveying habitats within PRIMNM, the team also wanted to explore new territory in international waters. International waters are often understudied compared to areas occurring within national jurisdictions, and are also extremely difficult to protect despite existing international agreements. During the expedition, five drifting wave buoys were deployed in collaboration with Scripps Institution of Oceanography and Sofar. These buoys will fill in large spatial gaps and increase our understanding of oceanographic and meteorological processes in the region. The E/V Nautilus also conducted extensive mapping operations in international waters, including the complete mapping of a previously unknown seamount in the Blackhawk seamount chain. Finally, the expedition completed an ROV survey on a previously unexplored guyot approximately 190 miles southwest of Johnston Atoll, discovering basalt outcrops with extensive coral and sponge communities dominated by Hemicorallia, Chrysogorgia, Paragorgia, Euplectellidae, and Dendoricellidae.

The 2019 E/V Nautilus field season is over, but check back in the spring to see live expedition footage from the seafloor at www.nautiluslive.org/. In the meantime, you can also find expedition overviews, photos, and video highlights.